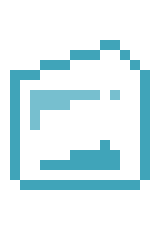 Organic matter is liquefied by the agents of decay and pressurized by tight spaces into the shapes of prismatoids. Galvanized by a cousin-instinct to hunger, the gelatin entity now extrudes itself forward in wedge form.

A gelatinous wedge is a tier 3 creature belonging to the oozes faction, and is typically found underground.

Gelatinous wedges attack by moving close to their target and engulfing them when the wedge is within an adjacent tile. While engulfing a target, a wedge will inhabit the same tile as the creature it is engulfing, and will remain completely stationary.[1] Engulfed creatures will suffer

2-6 damage every round[2][3] and will be unable to move; attempting to move will instead cause the creature to perform a melee attack against the wedge. Additionally, the creature will be unable to perform certain physical actions, such as Charge, Juke, and Jump.[4] Creatures who are being engulfed by a gelatinous wedge cannot be attacked by other creatures, and any attempting to do so will instead target the gelatinous wedge.

A gelatinous wedge will continue to engulf its target until either it or its victim dies. However, the victim can escape being engulfed prematurely through means such as