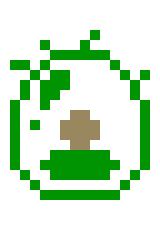 A mass of quivering, gelatinous slime. You barely perceive the outline of something inside.

Giant amoebas are a very common enemy and one of the most prolific oozes, appearing in many different locations across Qud, most notably in slimy biomes.

Giant amoebas attack in melee with their \slimy pseudopods, of which they possess 4. Each pseudopod is a cudgel weapon that deals

1d31-3 (Avg: 2) damage, and has a →penetration value that depends on the particular giant amoeba's Strength modifier.[1]

When a giant amoeba dies, it explodes into several pools of

slime. Each tile adjacent to the amoeba, including the tile it was occupying, will have an 80% chance of being filled with a pool, with each pool having a volume of 500 drams.[2]

blood, and cannot be knocked prone.[4]

This information is reliable as of patch 2.0.201.70.
Retrieved from "https://wiki.cavesofqud.com/index.php?title=Giant_amoeba&oldid=80300"
Categories: