From Caves of Qud Wiki
Jump to navigation Jump to search
This information is reliable as of patch 2.0.201.48. If this is no longer the current patch, you can help by updating it.
Electromagnetic Pulse 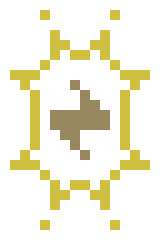 You generate an electromagnetic pulse that disables nearby artifacts and machines.

The following formulas are used to determine duration based on mutation level.

Radius is not determined by a formula. Instead, it is determined based on certain mutation level thresholds: