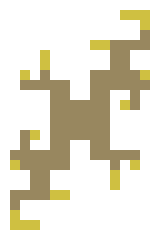 You disintegrate nearby matter.

Disintegration is a mental mutation that allows the player to deal massive disintegration damage to everything within a wide radius around the player. This damage is directly inflicted on the target; it will ignore AV, DV, and will only penetrate once.

AV and cannot be dodged. Two seperate damage calculations are performed based on if a target is a structural object or not, with structural objects (such as walls) taking far more damage on average than non-structural ones. The damage caused is determined by mutation level. After using Disintegration, the player will become exhausted for 3 rounds, during which they are unable to perform any action.

Disintegration does not affect creatures or objects that are not in the same phase state as the user, unless the user is omniphase.