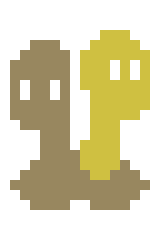 You have two heads.

Two-headed is a physical mutation that grants the player an extra head. Note that mutating an extra head such as through Chimera or creatures whose original body plan has two heads do not automatically gain this mutation.

The extra head granted by this mutation has an equip-able slot as a normal head does, as well as granting an additional face slot. However,

DV values granted by helmets and masks will be averaged across the two heads, meaning the player will have to wear two equipment pieces of the same type in order to gain the same

DV as normal. This does not affect Attribute bonuses granted by equipment, such as the Ego granted by wearing a

Two Headed reduces the action cost of mental actions, such as using a mental mutation, by a mutation level based percentage. Additionally, it grants the player a 50% chance to "shake off" a mental status effect; see Effects Affected, below. These effects have a chance to either be removed immediately upon contracting them or every turn that the player has them for.

Creatures that start with the Two-headed mutation have a chance to have separate names for each head.

The following formulas are used to determine mental action cost reduction and "shake off" chance based on mutation level.

The percent reduction for this mutation can increase past 100%, but the total energy cost of the mental action will never go below 0[1].

Two-headed affects all effects that are categorized as Mental, Negative, and Removable. It does not remove it if the effect is voluntarily applied to themself.

This information is reliable as of patch 2.0.204.51.
Retrieved from "https://wiki.cavesofqud.com/index.php?title=Two-headed&oldid=84331"
Categories: