From Caves of Qud Wiki
Jump to navigation Jump to search
This information is reliable as of patch 2.0.201.47. If this is no longer the current patch, you can help by updating it.
Spinnerets 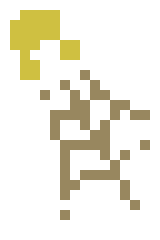 You can spin sticky silk webs.

While spinning, you leave webs in your wake as you move.
Duration: (level based)
+(level based) to saves vs. forced movement
Cooldown: 80 rounds
You don't get stuck in other creatures' webs.
+300 reputation with arachnids

Spinnerets allows a creature to spin

webs (and to spin

honey). Beginning to spin webs is a free action that does not take up a turn.

As the level of Spinnerets is increased, the save difficulty for other trapped creatures to escape the webs increases, as does the maximum weight that the webs can hold. Phased webs are slightly stronger than normal webs in this regard.

The following formulas are used to determine various features of the Spinnerets mutation.[1]