From Caves of Qud Wiki
Jump to navigation Jump to search
This information is reliable as of patch 2.0.201.47. If this is no longer the current patch, you can help by updating it.
Burgeoning 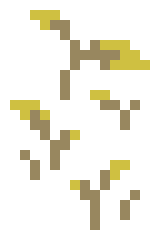 You cause plants to spontaneously grow in a nearby area, hindering your enemies.

Burgeoning is a mental mutation that allows the player to summon allied plants to fight for them.

Using Burgeoning on a non-occluding tile within 8 tiles will spawn plants in a 3x3 radius centered on the chosen tile, with a 20% chance for additional plants to grow in the surrounding tiles. These plants will be allied to the creature who summoned them, and thus hostile to anything that is hostile towards said creature. The plants summoned by Burgeoning can be attacked by the creature who summoned them without fear of retaliation, but will grant no XP when defeated.

What plants are summoned specifically when Burgeoning is used is determined by mutation level. This in turn determines the user's "plant summoning level" from which burgeoned plants can be chosen from.

Each plant that can be summoned when Burgeoning is used falls into one or more "tiers". What tier of plants the user's Burgeoning will draw from is determined by mutation level. The formula is:

0 is the lowest possible tier, whereas 9 is the highest possible tier. Each time Burgeoning is used, one plant from the corresponding tier is selected as the "main" plant; 50% of the plants summoned will be the main plant, while the other 50% will be other random plants from the same tier.

Mechanimist choralers have a special version of Burgeoning that only summons

qudzu regardless of mutation level.

To see a list of all possible plants and their weights, see Data:PlantSummoning.

The following formulas are used to determine cooldown and plant summoning tier (rounded up) based on mutation level.

Note in this case that "Random" designates that a random number between those provided will be factored into the formula. Additionally, if the cooldown formula returns a number less than 5, the cooldown will be set to 5 rounds instead.