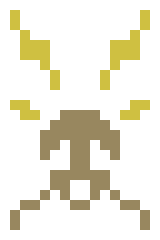 You sunder the mind of an enemy, leaving them reeling in pain.

For up to 10 rounds, you engage in psychic combat with an opponent, dealing damage each round.
Taking any action other than passing the turn will break the connection.
Each round you make a mental attack vs mental armor (MA).
Damage increment: (level based)
After the tenth round, you deal bonus damage equal to the total amount of damage you've done so far.
Range: sight
Cooldown: 80 rounds

Sunder Mind is a mental mutation that can be used on a creature to deal mental damage every round for ten rounds.

This mutation grants the "Sunder Mind" activated ability, which when used, will prompt the player to select a tile somewhere within the current zone. Any tile can be selected regardless of distance, so long as the tile is visible or contains a creature detected by Sense Psychic. Sunder Mind will only succeed if it is used on a creature with a mind.

Selecting a tile containing a creature will cause both the user and the target to become "locked in psychic battle".[1] This status condition causes the target to take damage determined by mutation level every round, allows the attacker and target to see each other even if they are in darkness, behind occluding objects, or invisible, and prevents any other creatures from using Sunder Mind on the attacker or target. The psychic battle will continue for ten rounds or until interrupted.

When there are only five rounds remaining, both the attacker and the target will suffer a nosebleed. This effect is distinct from the bleeding status effect, and deals a flat 1 damage every round until Sunder Mind is interrupted for any reason. If a creature lacks a face, they will instead "hemorrhage", which is identical in nature to a nosebleed and a purely cosmetic difference.

On the tenth round, the target will suffer additional damage equal to the total damage done during the previous 9 rounds; if this damage instance kills them, their head will explode.

As it deals mental damage, Sunder Mind must penetrate a creatures Mental Armor in order to deal damage. Normal penetration rolls take place each round damage is dealt, with the user's →PV value equal to their Ego modifier or mutation level - 2 (whichever is higher), rolled against the target's MA.[2] The damage increment denotes the mental damage inflicted per penetration.

A psychic battle will be interrupted if:

A sunder mind attack will not be interrupted if:

Sunder Mind and its related effects can cause the player to receive several unique death messages.

The player will receive the following death message if they die due to a nosebleed or hemorrhaging, respectively:

If the player dies due to their head exploding, they will receive the following popup message:

Then finally, this death message:

This information is reliable as of patch 2.0.201.69.
Retrieved from "https://wiki.cavesofqud.com/index.php?title=Sunder_Mind&oldid=78082"
Categories: