From Caves of Qud Wiki
Jump to navigation Jump to search
This information is reliable as of patch 2.0.201.46. If this is no longer the current patch, you can help by updating it.
Amphibious (D) 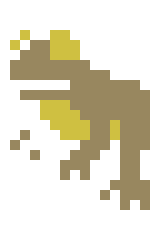 Your skin must be kept moist with fresh water.

You pour water on yourself rather than drinking it to quench your thirst.
You require about two-thirds more water than usual.
+100 reputation with frogs

Amphibious (D) is a physical defect that affects the player's thirst. It also provides a 100 point reputation bonus with frogs, and an unlisted 100 point bonus with svardym.

Amphibious creatures will thirst ~67% faster than creatures without Amphibious. By default, the player character needs to drink one dram of water every 500 turns. With Amphibious, this becomes a dram every 300 turns.

Despite the description, players with Amphibious still have to drink

water as normal to hydrate themselves; pouring water over themselves does nothing. Automatic drinking also functions as normal.

Amphibious creatures with glotrot cannot contaminate containers they drink from with

putrescence when the automatically drink automation function is used. However, this is still possible when choosing to manually drink from a container. Amphibious creatures are also unable to vomit due to overdrinking.

Players with Amphibious have several cosmetic changes compared to players without.

When a player with Amphibious drinks water, the following message will be displayed:

Additionally, the player's thirst levels will have different names: