From Caves of Qud Wiki
Jump to navigation Jump to search
This information is reliable as of patch 2.0.201.48. If this is no longer the current patch, you can help by updating it.
Ego Projection 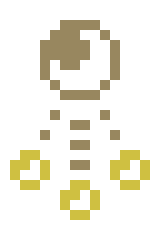 Through sheer force of will, you perform uncanny physical feats.

Augments one physical attribute by an amount equal to twice your Ego bonus
Duration: (level based)-(level based) rounds
Cooldown: 200 rounds

Ego Projection is a mental mutation that allows the user to enhance their physical attributes for a short time.

Ego Projection grants three activated abilities; "Boost Strength", "Boost Agility", and "Boost Toughness". Using these abilities will temporarily increase the player's Strength, Agility, and Toughness respectively, by an amount equal to double the player's Ego bonus. If the player has no Ego bonus, or a negative Ego bonus, these attributes will instead be increased by 1. This will last for a number of rounds as determined by mutation level. All of the standard bonuses that come with increasing these attributes apply; however, as these increases are temporary, they cannot be used to satisfy the attribute threshold for buying certain skills.

Using any of the three abilities will place all three on identical cooldowns, for a number of rounds determined by mutation level. If Ego Projection's cooldown period is lower than it's duration, and they are able to use it again before the duration has run it's course, they can use Ego Projection again to increase another attribute; however, they cannot choose to increase the same attribute twice in a row, as the effect will not stack.

The following formulas are used to determine low and high duration based on mutation level.[1]