From Caves of Qud Wiki
Jump to navigation Jump to search
This information is reliable as of patch 2.0.201.88. If this is no longer the current patch, you can help by updating it.
Domination 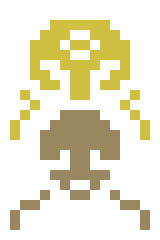 You garrote an adjacent creature's mind and control its actions while your own body lies dormant.

Domination is a mental mutation that allows the player to take control of another creature's body.

Domination grants the "Dominate Creature" ability, which, when used on a creature within one tile of the player, causes the player to assume complete control of them. While dominating a creature, the player can perform essentially any action they could normally do within their own body, such as manipulating the creature's inventory, utilizing any abilities they might have, spending points within their character sheet, etc. Additionally, the creature's normal faction reputation will still apply while it is being dominated.

Dominating a creature will leave the player's original body completely inert; it will not move or act on its own, and will remain that way until domination is broken.

Control of a creature can be relinquished either willingly by using the "End Domination" ability while dominating a target, or due to domination being broken forcibly. This can happen if the player's original body takes damage or if the creature being dominated dies. Once the connection is broken, the player will assume control of their original body once again.

Successfully dominating a neutral creature and then ending domination will not cause them to become hostile; however, a failed attempt to dominate them will, along with any allies who witnessed the attempt. Additionally, creatures with a mental shield, such as oozes, plants, and robots, are immune (though robots can be dominated via a

The following formula is used to determine duration based on mutation level.

There are two ways for a player with Domination or a

Regardless of method, the player will receive the message "Your mind is stranded here." and will be permanently trapped in the destination body: the Dominated effect ends, and the player no longer has the ability to End Domination.