From Caves of Qud Wiki
Jump to navigation Jump to search
This information is reliable as of patch 2.0.201.48. If this is no longer the current patch, you can help by updating it.
Teleportation 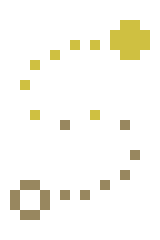 You teleport to a nearby location.

Teleportation is a mental mutation that allows the player to teleport instantaneously to a nearby location, with a certain margin of error.

Teleportation grants the "Teleport" ability, which when used, will prompt the player to pick a tile to use the ability on. The selected tile must be a visible or previously explored tile. Around the selected tile will be shown an area containing all of the possible tiles the player can be teleported to, the radius of which is determined by mutation level.

Confirming one's selection will cause the player to instantly teleport to a random tile within the area shown around the selected tile. If Teleport is successful, it will be placed on cooldown for a mutation level-based number of rounds. If the randomly chosen tile is occupied by a wall or other impassable obstacle, Teleport will print "You are shunted!" to the message log and will attempt to find an empty tile within 1 tile to place the player in instead; if such a tile cannot be found, Teleport will fail and its cooldown will not be incurred.

The following formulas are used to determine uncertainty radius and cooldown based on mutation level.[1]