From Caves of Qud Wiki
Jump to navigation Jump to search
This information is reliable as of patch 2.0.201.48. If this is no longer the current patch, you can help by updating it.
Sense Psychic 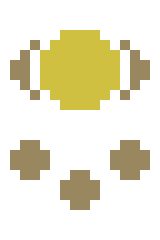 You can sense other mental mutants through the psychic aether.

You detect the presence of psychic enemies within a radius of 9.
There's a chance you identify detected enemies.

Sense Psychic is a mental mutation that allows the player to "see" psychic creatures within a moderate radius, even if blocked by obstacles.

For a creature to be classified as a "psychic", they must have at least one mental mutation. Such creatures will be visible to the player in a circular area with a radius of 9, even if they wouldn't normally be visible due to occluding objects or a lack of light. Initially, the creature will be shown as a ? until they have been "identified"; identification has to a chance to occur every turn for any creatures within range of Sense Psychic, with creatures who are closer to the player having a higher chance of being identified. Once successfully identified, the player will be able to see the general shape of the creature and will be able to target them with

Sunder Mind, but won't be able to look at them to determine to their name and description. Any identified creatures will remain as such until they exit Sense Psychic's range, and will have to be re-identified if they come within range once more.

In addition to sensing creatures with mental mutations, Sense Psychic can also sense

The following formula is used to determine identification chance (rounded down) based on proximity of affected creatures to the player.[2]

Note that despite the formula having a "Level" variable, Sense Psychic cannot gain additional mutation levels, and thus this value will always be 1.