From Caves of Qud Wiki
Jump to navigation Jump to search
This information is reliable as of patch 2.0.201.48. If this is no longer the current patch, you can help by updating it.
Double-muscled 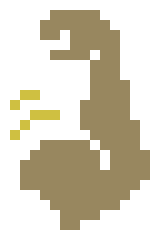 You are possessed of hulking strength.

Double-muscled is a physical mutation that increases the player's Strength. Additionally, every melee attack a creature with Double-muscled makes that hits and successfully penetrates has a mutation level based chance to daze their target for 2-3 rounds. This effect functions similarly to dazing caused by a critical hit from a cudgel, and will stun creatures that are already dazed. A single attack can daze more than once if there are multiple sources of daze, such as a cudgel's critical hit or Bludgeon. This can stun a target with a single blow.

The following formulas are used to calculate strength bonus and daze chance based on mutation level. [1]