From Caves of Qud Wiki
Jump to navigation Jump to search
This information is reliable as of patch 2.0.201.48. If this is no longer the current patch, you can help by updating it.
Photosynthetic Skin 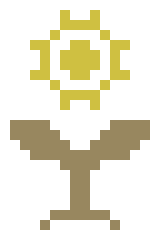 You replenish yourself by absorbing sunlight through your hearty green skin.

Photosynthetic Skin is a physical mutation that allows the player to derive sustenance from the sun.

campfires to satisfy their hunger as normal.

When a player with Photosynthetic Skin is low on food, rather than becoming Famished!, they will become Wilted!, reducing their natural healing rate by 10% and their Quickness by 5.

Every 6 hours (or 300 game ticks) under the sky and during the day, a player with Photosynthetic Skin will generate one serving of starch and lignin, up to a maximum amount determined by mutation level. These items are intended to be used when cooking and cannot be used in meals unless the player has the Meal Preparation skill. They will not be present in the inventory and cannot be interacted with in any way except for when cooking. When used in a meal, starch and lignin will grant the Quickness and regeneration bonus of the "Bask" ability, respectively.

Creatures with Photosynthetic Skin will bleed

sap as well as

blood, and will take damage from

The following formulas are used to determine bask bonus duration (rounded down), regeneration bonus, Quickness bonus, and max starch/lignin servings (rounded down) based on mutation level.[1]