From Caves of Qud Wiki
Jump to navigation Jump to search
This information is reliable as of patch 2.0.201.48. If this is no longer the current patch, you can help by updating it.
Precognition 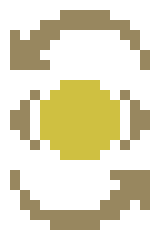 You peer into your near future.

You may activate this power and then later revert to the point in time when you activated it.
Duration between use and reversion: (level based) rounds
Cooldown: 500 rounds

Precognition is a mental mutation that allows the player to foresee their near future, potentially allowing them to avoid unfortunate outcomes.

Precognition grants two activated abilities: "Precognition - Start vision" and "Precognition - End vision". Using the former creates a temporary save of the current game-state, places the ability on cooldown, and begins a "vision"; this vision will last for a mutation level-based number of rounds. The vision can be ended in one of three ways: by letting the vision run it's course, by choosing to end the vision early with the "End vision" ability, or by dying before the duration runs out.

Precognition functions entirely differently if used by a creature other than the player; when Precognition is activated, and the creature is killed before it's duration runs out, the creature will be revived with full HP, and the message log will return the following:

Precognition has a special interaction with the

amaranthine prism. If the player equips the amaranthine prism during a vision, returning to their start of the vision will cause the prism to be unequipped, making this one of the few legitimate methods of removing the prism after wielding it. However, this course of action will return the following message:

After this, the player will lose 100 reputation with highly entropic beings and 2-5

space-time vortices will spawn within 5-11 tiles of the player.

Should the player choose to wield the prism during a vision and forgo returning to the start, the prism will remain equipped as normal, and will be impossible to remove from then on.

The following formula is used to determine duration of vision based on mutation level.[1]