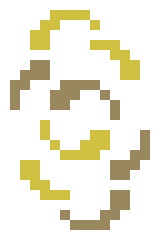 You confuse nearby enemies.

Confusion is a mental mutation that allows the player to confuse nearby enemies.

This mutation grants the "Confusion" activated ability, which when used, will prompt the player to pick a target tile. This will also display the effective area of the ability, which will be a cone shape originating from the player. The size and angle of this cone are determined by mutation level.

Any creatures caught within the cone of the ability will be inflicted with the confused status, penalizing their

DV, MA, Willpower, Intelligence, and Ego by a mutation level-based amount. It will also cause them to move and act semi-randomly. This effect will last for a number of rounds as determined by mutation level.

Confusion is a mental attack and therefore must penetrate a creature's MA at least once, otherwise the effect will be resisted[1] (or reflected if the creature has

Mental Mirror active). Creatures with a mental shield, such as oozes, robots, and plants, cannot be confused.

Using Confusion on a neutral creature does not count as a hostile action on it's own, and will not incite aggression from such creatures or their allies.

Note that the mental penalty cannot be any lower than -10.