From Caves of Qud Wiki
Jump to navigation Jump to search
This information is reliable as of patch 2.0.201.48. If this is no longer the current patch, you can help by updating it.
Teleport Other 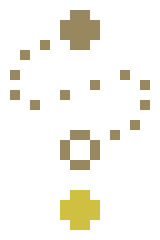 You teleport an adjacent creature to a random nearby location.

Teleport Other is a mental mutation that allows the player to teleport a creature to a random nearby location.

This mutation grants the "Teleport Other", activated ability, which when used on a creature directly adjacent to the player, will teleport them to a random tile within the current zone. This can be to any tile in the current zone, even tiles the player can't see or hasn't explored, so long as it is not occupied by a solid obstacle. This act is not considered hostile on its own, and will not incite aggression from neutral creatures or their allies.

The player cannot use Teleport Other to teleport themselves, although it can be reflected back at them by a creature with

Mental Mirror. Attempting to select oneself with Teleport Other returns the following message:

The following formula is used to determine cooldown based on mutation level. [1]

Note that cooldown cannot be any lower than 5 rounds.

Creatures with Teleport Other