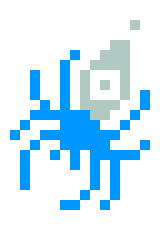 This three-span, rust-hued arachnid is so named for its instinctual ability to displace those who threaten it by folding space in the local area.

A voider is a creature belonging to the arachnids faction. Voiders can be found within

1d81-8 (Avg: 4.5) damage. Voiders will also utilize their Teleport Other mutation, which they possess at level 4, to teleport adjacent creatures to a random tile somewhere within their current zone.[3]

While idle, voiders will occasionally spin

webs with their Spider Webs mutation, which they possess at level 4.[3] This mutation grants a voider the "Spin Webs" activated ability, which allows it to create webs in tiles it moves into. Each use of Spin Webs will allow a voider to create 4 webs. Spider Webs also makes voiders immune to becoming stuck, whether it be in webs or in any other sticky substance, such as

If a creature hostile to a voider becomes stuck, whether by walking into webs or into another sticky substance, the voider will cease trying to flee and will advance on the creature in order to attack. The voider will resume fleeing if the creature becomes unstuck and moves out of melee range.[5]

voider corpse. This corpse can be butchered to produce one

This information is reliable as of patch 2.0.201.73.
Retrieved from "https://wiki.cavesofqud.com/index.php?title=Voider&oldid=71784"
Categories: