From Caves of Qud Wiki
Jump to navigation Jump to search
This article has information that is missing or not up to par.
Reason: Add list of all potential creature encounters, more tidying up, some more robust strata descriptions...
Bethesda Susa 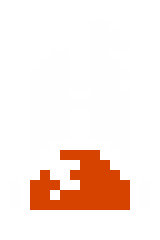 Bethesda Susa is a mid-game dungeon that the player is sent to with the quest Decoding the Signal once More Than a Willing Spirit is complete. For a guide on clearing Bethesda Susa, see Bethesda Susa/Guide.

Spoiler Warning: This article contains information normally only found in the course of advancing the main quest line. 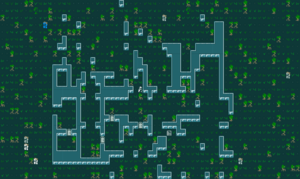 An example of the surface level layout of Bethesda Susa.

A fairly typical jungle exterior with marble ruins and a staircase leading downwards. Commonly populated by

brainers, and the occasional 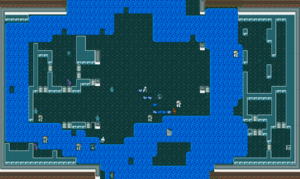 An example layout of the ruined wharf.

An underground river passes through here from the zones to the north and south. 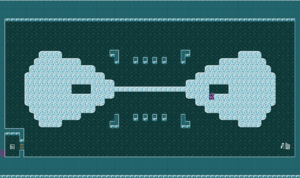 An example layout of a healing pool stratum.

These three strata are quite similar, each containing a unique Troll. The first healing pool is guarded by

Jotun, Who Parts Limbs, who carries the

bronze key needed to unlock the down staircase. If you are neutral with the Trolls faction, you may simply trade for the key instead of defeating him.

The second healing pool is guarded by

Fjorn-Kosef, Who Knits The Icy Lattice, who holds the

silver key needed to proceed. Again, they may be traded with if the player's faction reputation is sufficient.

The final healing pool is defended by the invisible

Haggabah, Who Plies The Umbral Path, the third and most dangerous of the trolls. Haggabah possesses the

gold key required to advance. Unlike the previous Trolls, trading with Haggabah is a bit more challenging due to his Invisibility.

On the 5th stratum down is a

chrome platform which can be used to skip the next 5 strata, taking the player all the way down to the 11th stratum. Stand on it and activate the

control switch to go down. This same elevator can be recalled to anywhere in its path by using the button stationed there, and can be used to re-ascend to this stratum. 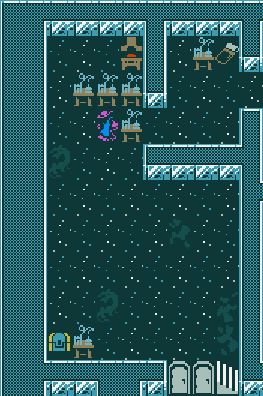 Eight strata below Bethesda Susa you will find the

alchemist in their workshop. Speaking with them grants an achievement. Be wary of provocation, once hostile the alchemist can, and will, go out in a blaze of glory.

The 11th stratum holds the destination platform for the elevator from the 5th level. If the elevator platform is not present, it may be called to this strata using the control switch. If wanting to descend, the player can jump into the

deep shaft to arrive at the 12th stratum, or can just take the stairs. 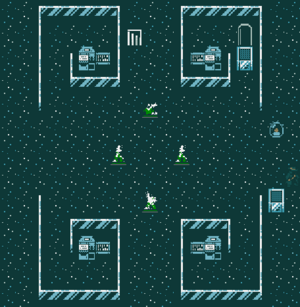 On this stratum are four 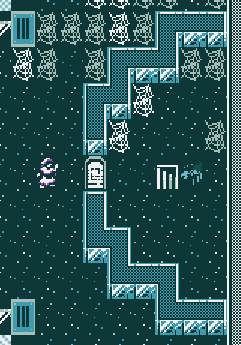 If the player has no cold resist at all, they can freeze solid on these strata.

There are six cryogenic chambers on the 14th stratum, and the intact ones are filled with

phase spider has been spinning

phase webs at the east end of the floor, which are one possible way of passing through the

Stratum 15 contains six more intact cryogenic chambers, several of which contain (in a frozen state) potentially game-ending creatures. Also, there is a (non-frozen)

missile launcher. If the cannibal explodes open any of the chambers, the player may be forced to confront:

To the west is another

chrome platform and control switch to go down a single stratum to the final level.

Temple of the Rock

Temple of the Rock layout.

If the player has sufficient reputation to enter the holy places of the Mechanimist faction, this is a peaceful level, and the player can even loot the chests found here without provoking hostility. If not, they may be forced to confront a variety of dangerous Mechanimists, including

The player can make their way to the

baetyl located slightly east of center of the zone to advance the Decoding the Signal quest. The control switch behind the baetyl will reactivate the entrance elevator leading back to the previous floor.

disciple of the Sightless Way will always spawn somewhere on this floor, though the Mechanimists are not friendly to them.

Players should be prepared to deal with increasingly low temperatures as they descend, as well as to fight or bypass the inhabitants and hazards of Bethesda Susa. Some things that may help: