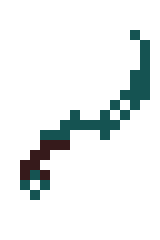 This blade is bowed and black as the desert night. The hilt is inscribed with gold, calligraphic glyphs.

The ceremonial vibrokhopesh (sometimes to shortened "vibrokhopesh" or "CVK" fanonically) is a tier 7 long blade that deals significant damage and has the Vibro property. This means that its →PV will match the target's

It requires 3 turns to fully boot. The turn spent equipping it will have the vibrokhopesh emit a buzz. Once fully booted, it will hum. If forcefully shut off, it will emit a clack.

Saad Amus, the Sky-Bear and all

clones of Saad Amus, the Sky-Bear spawn with one equipped in their main hand.

The Zero Point Energy Collector (ZPEC) is a EMP-sensitive part that charges the ceremonial vibrokhopesh depending on the current world that the blade resides in.

As long as the vibrokhopesh is in "JoppaWorld" which is the starting world that the player starts in, the ZPEC will generate 40 charge a turn, offsetting the vibro charge use of 20. Charge also generates in "OrbWorld", but this world currently cannot be visited.

How the ZPEC exactly works is unknown, but is reality distorting and cannot work under the effects of normality. This means that being in a normality field or normality gas will cause the ZPEC to stop providing energy to the vibrokhopesh.

Caution: This article or section contains unverified speculation and should not be considered canonical.
Retrieved from "https://wiki.cavesofqud.com/index.php?title=Ceremonial_vibrokhopesh&oldid=79919"
Categories: