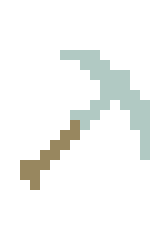 Its head is a shard of fullerite, pointed on one end and flat on the other. Its handle is a pole of fiberglass and metal wrapped in fraying wood.

A pickaxe is a simple, if uncommon, digging implement. It will destroy any wall after eight successful penetrations.

For walls with a high armor value (AV), it may take quite a few attempted hits to penetrate with the pickaxe. However, the player is always guaranteed to penetrate on a critical hit; as a result, with patience, even the most well-armored wall can be destroyed.

Equipping the pickaxe grants the "Dig" activated ability; this ability is a form of autoact which allows the player to select a tile as a target destination, regardless of distance or visibility. Confirming one's selection will cause the player to move in a straight line to the destination, while automatically attacking and destroying any walls in the way.

Despite being described as being made from fullerite, the pickaxe is not a proper weapon, and is treated as a →4/4

This section is opinion-based. Your mileage may vary.
Retrieved from "https://wiki.cavesofqud.com/index.php?title=Pickaxe&oldid=80214"
Category: