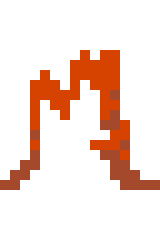 A naturally reddened outcropping of stone juts out of the salted crag.

Joppa (or its ruins). The player is instructed to visit there for the quest What's Eating the Watervine? by

Mehmet. However, it can be visited at any time.

The dungeon is 4 strata deep, ending at the mouth of an underground river. This river can be followed into the

waterlogged tunnel, and into Joppa.

The creatures and plants that spawn are generally the same as other zones located within the Desert Canyons.

For a guide, see Red Rock/Guide.

The surface is littered with desert canyon critters and plants:

Note that Baboons1 controlls how many baboons are spawned. Regular

baboons will appear most often, but there will be

shrewd baboons, and a 5% chance of a legendary baboon appear. For more information, visit the Data:Baboons1 table.

Along with creatures, there are harvestable plants that have a chance of appearing:

Like other locations, the surface has a chance of being affected by tarry biomes or rusty biomes. The associated spawns will appear accordingly.

The undergound follows a simple pattern of rectangular rooms and corridors that lead through them. This repeats until the player reaches the fourth floor.

The following creatures may appear[1]:

When the player has reached the bottom, what creatures spawn is slightly different. The ground will be littered with junk (tier 1 and 2), gnawed

watervines, and various types of ammo. Aside from the normal spawns, will be filled with

glow-wight cultist of Agolgut. If the player has accepted the quest What's Eating the Watervine?, seeing a girshling will accomplish a quest step. The player can then decide to return the way they came or travel through the waterlogged tunnel to complete the quest.