From Caves of Qud Wiki
Jump to navigation Jump to search
This information is reliable as of patch 2.0.200.89. If this is no longer the current patch, you can help by updating it.
Joppa 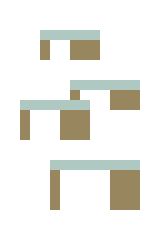 Ants in the viridian chaff, the farmers sap the last drops of pristine moisture out of the salt-spangled earth.

Joppa is one of the villages that the players can start the game in. It contains two unique quests and a secret entrance to

Red Rock via the

waterlogged tunnel in the upper left salt water pond. Along with all starting villages, there is a tinker that will let you repair items and recharge cells before entering

Grit Gate. The village's faction is the villagers of Joppa. They will teach harvestry upon water ritual and Joppa's signature dish, Apple Matz.

On the upper right corner, there will always be a statue of the sultan Resheph.

On (random date), you arrive at the oasis-hamlet of Joppa, along the far rim of Moghra'yi, the Great Salt Desert.

Around you, moisture farmers tend to groves of viridian watervine. There are huts wrought from rock salt and brinestalk.

On the horizon, Qud's jungles strangle chrome steeples and rusted archways to the earth. Further and beyond, the fabled Spindle rises above the fray and pierces the cloud-ribboned sky.

Click on an object to take you to their main page!

One screen north of Joppa lies a graveyard full of randomly generated tombstones of random people who died and their cause of death. There is also a randomly generated sultan statue that will always grant a secret that provides the location of that sultan's historic site.

In the north west corner of Joppa, there lies a

millstone for public use. It runs on the mechanical power provided by the water wheel.

This section is an excerpt from Millstone#Milling.

When interacted with, the millstone acts as a pseudo chest. If the right food item is placed inside, the mill will grind it into its preserved form. It takes one turn for the food to be milled. This mill is considered open to the public, so the villagers will not become angered if the player takes from the millstone. If it is disconnected to the wooden mechanisms and the water wheel, it will no longer grind.[1][2]

If the player chooses to start in a different village other than Joppa, Joppa will be replaced by the