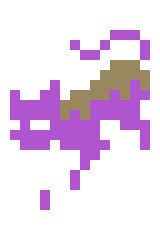 The fine glass-like fibers of this compact feline's coat collect and bend the light of far stars into strange, semiophorous loops.

A ray cat is a creature belonging to the cats faction. Ray cats can be found rarely underground, as well as in

flower fields. Additionally, 2-6 ray cats can be found alongside

cat herders at the

Ray cats passively give off light in a circular area with a radius of 4 tiles, about the same as a

torch.[3] If the player is favored by cats, they can pet ray cats, which will bestow phosphorescent on the player for 100-200 rounds. This will cause them to give off light in a circular area with a radius of 3 tiles.[4]

The "joppa ray cat", as it is referred to internally, is a unique ray cat that has a 2% chance to spawn in the

ruins of Joppa, which will replace Joppa if the player chooses a different starting village when creating their character.[6][7] Besides being excluded from dynamic encounters, the joppa ray cat is identical to a normal ray cat in all regards.[8] It is a creature distinct from Ctesiphus, however, who will be guaranteed to spawn in Joppa if the player selects Joppa as their starting village.

Caution: This article or section contains unverified speculation and should not be considered canonical.

This information is reliable as of patch 2.0.201.86.
Retrieved from "https://wiki.cavesofqud.com/index.php?title=Ray_cat&oldid=60094"
Categories: