From Caves of Qud Wiki
Jump to navigation Jump to search
This information is reliable as of patch 2.0.201.68. If this is no longer the current patch, you can help by updating it.
Burrowing Claws 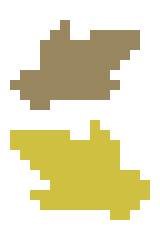 You bear spade-like claws that can burrow through the earth.

4 successful attacks dig through a wall
Claw penetration vs walls: (level based)
Claws are also a short-blade class natural weapon that deal (level based) damage to non-walls.

(if prerelease content is enabled):
Can dig passages up or down when outside of combat

Burrowing Claws is a physical mutation that replaces the player's natural fists with \claws that are classified as Short Blade natural weapons, with different properties depending on if the player's target is a structural object or not.

Burrowing Claws allows a creature to destroy a wall within four attacks that successfully penetrate. The penetration bonus is determined by mutation level and is independent of the →PV used against non-structural objects, which is instead determined by the creature's Strength bonus. If the creature is wielding a weapon in a hand with \claws, walls can still be broken within four successful attacks, but the →PV of the weapon wielded will be used instead.

Having this mutation grants the player the "Dig" activated ability; this ability is a form of autoact which allows the player to select a tile as a target destination, regardless of distance or visibility. Confirming one's selection will cause the player to move in a straight line to the destination, while automatically attacking and destroying any walls in the way.

The \claws granted by Burrowing Claws also act as weapons falling under the Short Blade skill tree, benefitting from any skill the creature has within that tree. \Claws will only be used as weapons if nothing occupies the hand slot they are located on.

If the player has unfinished and prerelease content enabled, Burrowing Claws grants two additional abilities that allow the player to create staircases up or down when out of combat.

The following formula is used to determine penetration bonus based on mutation level.