From Caves of Qud Wiki
Jump to navigation Jump to search
This information is reliable as of patch 2.0.201.56. If this is no longer the current patch, you can help by updating it.
Horns 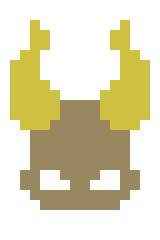 Horns jut out of your head.

20% chance on melee attack to gore your opponent
Damage increment: (level based)
Goring attacks may cause bleeding
Horns are a short-blade class melee weapon.
+(level based) AV
Cannot wear helmets
+100 reputation with antelopes and goatfolk

Horns is a mutation that grants the

A pair of massive, curling horns. They can deliver devastating gore attacks to enemies.

If the character has multiple heads, the horns will only be equipped onto one head. Like other armor, the

DV will be averaged across all heads. As well as being armor, Horns act as a short blade weapon type, and can benefit from the Short Blade skill tree. They are one of the few short blade weapons that has an uncapped strength penetration modifier.

When the player selects the Horns mutation, they can also Customize it by pressing "C" during character creation to select the variant of horns they would like. The options are: Horns, Horn, Antlers, or Casque. Mechanically, these variants are identical to each other.

Bleeding effects inflicted by Horns do not stack.

The following formulas are used to determine damage and other effects based on mutation level.[1][2]