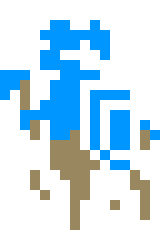 All lithe muscle and attentive vigilance, Neelahind becomes her occupation as the warden of Bey Lah. She wears an adapted suit of plate armor, its faulds draping over her strong flanks. But her brown eyes betray another truth: inside the body of this stout warrior hides an anxious and fearful faundren.

Warden Neelahind is the Warden of

Neelahind is willing to perform the water ritual, but only after the events of Kith and Kin. She can teach the Shield skill and also is willing to join the player's party, regardless of the quest's outcome as long as she does not leave the village with

Neelahind and Eskhind were romantically involved before Esk's exile from Bey Lah. This is made clear by a combination of Neela's words with the player character and the contents of the