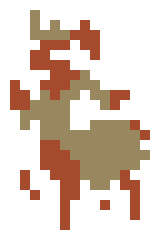 The proud stance of this hindren and the fire in her eyes immediately set her apart from her cervidian kinfolk. Those sharp green eyes peer out over the white-flecked reddish fur of her cheeks, and her split philtrum is the only deviation from the meticulously neutral straight lines of her lips. Save for the leather bracers on her arms, nothing she wears or wields is of hindren make: not the long folded carbide blade in one hand, nor the emerald light-dagger in the other, not the scaly boots on all four feet, nor the chain hauberk draped over her chest.

Eskhind is an exiled hindren who resides within the Charred tree. She is accused of stealing Kindrish by

Hindriarch Keh. If spoken to, she will travel to Bey Lah and allow the continuation of the quest line. Depending on the outcome of Kith and Kin, she will be re-exiled or become Hindriarch Esk.

If she becomes Hindriarch, Eskhind will become water ritualable, granting +100 reputation to the hindren of Bey Lah. She teaches the ability Dual Wield for 450 reputation.

According to Neelahind, she is a skilled forager(despite being poor at crafting) and is headstrong. She is highly protective of those she cares about; Eskhind states that one of the reasons she left is because of the Hindriarch's conservative views of society, including the gender of her sister, Meyehind. She despises watervines, including eating them. She is also terrified of