From Caves of Qud Wiki
Jump to navigation Jump to search
This information is reliable as of patch 2.0.201.47. If this is no longer the current patch, you can help by updating it.
Heightened Hearing 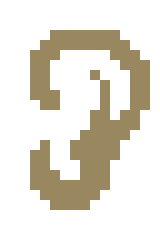 You are possessed of unnaturally acute hearing.

You detect the presence of creatures within a radius of (level based).
Chance to identify nearby detected creatures

Heightened Hearing is a physical mutation that grants the player the ability to "hear" nearby creatures, allowing you to locate them without sight.

Heightened Hearing is a passive ability that will reveal creatures that the player in unable to see, either due to occluding obstacles or a lack of light, within a circular area whose radius is determined by mutation level. When a creature enters this area, they will initially be shown as a ? until have been "identified", which will allow the player to see their general shape, but will prevent them from looking at the creature to see it's name and description. The player has a mutation level-based chance every turn to identify a particular creature within range. Once identified, a creature will remain as such until they exit Heightened Hearing's range. Creatures must be identified every time they exit and then come back into range, even if they had been previously identified.

The following formulas are used to determined radius of hearing and chance to identify based on mutation level.[1][2]

If mutation level is equal to or greater than 10, the radius is instead equal to 40.