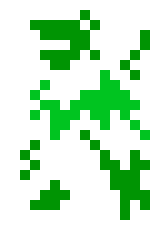 Before you reclines a man clothed in leafy raiment, so svelte and still you mistake him for the fallen branch of a sickly tree until you meet the gaze of his cerulean eyes. Upon closer scrutiny, you discern the hilts of his twin swords, Caslainard and Polluxus, rising through the foliage of his cloak and over his shoulders. His sylvan sashes, of which he wears several, are strewn with the ears, claws, and horns of creatures unfamiliar to you, and as you examine them, he scrutinizes you wearing an expression that bears qualities of both a smirk and a scowl yet that is not quite either.

Svenlainard, Trophy Hunter is a hunter and merchant found residing in

Kyakukya, though he is not a member of the Villagers of Kyakukya faction.

He sells a variety of hunting-themed items, such as the various ape fur items.