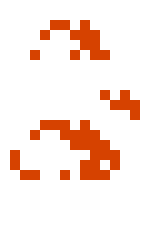 A jungle village of ape-god worshippers and their giant mushroom dwellings.

Kyakuya is a village in the

jungle, notable for its merchant,

Yurl, a guaranteed copy of the

Corpus Choliys, and for granting the Raising Indrix quest. Additionally, Kyakukya is the only village where hostile creatures can spawn in the village outskirts.

Kyakukya is populated mostly by

woodsprogs, with a small group of

worshippers of Oboroqoru gathering around a statue of their god which lies on the eastern side of the village.

The village’s mayor is

Mayor Nuntu, an albino ape guaranteed to sell a copy of the

Corpus Choliys and a merchant advertisement. The bookshelves in his study also contain a guaranteed copy of

Heirlooms of Qud, along with other books, including recipes.

Yurl, the village merchant, has a shop in the northwestern corner of town.

There are two pools of stored water. This water can be freely collected by walking through the sandstone.