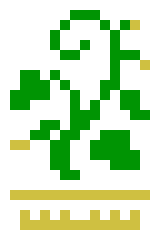 Yurl, a sentient cucumber vine, puts their roots down in a squat clay pot on the floor of their hut. Myriad wares rest on oaken shelves throughout the room, and with their tendrils Yurl exhibits them to interested customers by crawling along an iron trellis. You notice that Yurl creeps toward products almost before you think of them; the gift of telepathy affords the sprightly vine a distinct advantage as a chandler.

Yurl is a sapient mutated plant member of the Consortium of Phyta and villagers of Kyakukya factions, and a resident of

Kyakukya. They act as Kyakukya's general merchant, and have a shop set up in the northwest corner of the village.[1]

Yurl is a sentient cucumber vine, and a "chandler" and "notary" for the Consortium of Phyta. They offer little about their own backstory, save for the fact that they've "been growing out of this pot for a while now", and before that, they were "in another pot".

Mayor Nuntu claims that Yurl is "harmless", and came to Kyakukya "a few years ago" after the previous chandler, a hyacinth named Plysago, suffered an "accident" at the hands of a hunter called Axelcatl.

Like other members of the Consortium, Yurl has a certain disdain for fungi, and takes offense at the notion of "consorting" with them, claiming that fungi are only for consumption and shelter.

Asphodel, Earl of Omonporch, calling xem a "socialite" and a "scoundrel", and claiming that they "hate" xem. They also mention that Plysago had the idea to seize control of the Spindle first, but that Plysago "isn't around to make their case".

Yurl, being a general merchant, stocks a variety of items, and notably carries a large supply of ammunition. They will restock their wares periodically.[2]

Notably, due to their Consortium of Phyta affiliation, Yurl will be hostile to players with enough fungal infections.

Yurl only comes with one piece of equipment, a

clay pot, which will grant them an AV bonus of

2. They possess no weaponry, and will simply attack in melee with their manipulators, which are equivalent to their fists.[3]

Yurl possesses the Cudgel Proficiency and Berate skills. The former will increase Yurl's accuracy when attacking with their manipulators, and the latter will allow Yurl to inflict shamed on a target.[3]

This information is reliable as of patch 2.0.201.88.
Retrieved from "https://wiki.cavesofqud.com/index.php?title=Yurl&oldid=60515"
Categories: