From Caves of Qud Wiki
Jump to navigation Jump to search
Asphodel, Earl of Omonporch 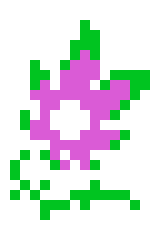 Possessed of the enterprising spirit that stirred in Hegelrut ages ago, Asphodel (called the Lovely) recently flitted toward the Spindle with xyr asphodelytes in tow and crowned xemself Earl of Omonporch. There xe reposes in the musa grove, under the Great Shade, unfurling xyr petals into perfect contours and holding court.

Asphodel, Earl of Omonporch is a legendary sapient mutated plant member of the Consortium of Phyta and flowers factions. Xe is the self-proclaimed "Earl" of

Omonporch, and resides there, in the Arcade to the Twin Gates.[1]

Asphodel is a sentient mutated flower, presumably a kind of asphodel given xyr name. They are the Earl of Omonporch; not by appointment or inheritance, but, by xyr own account, because xe "proclaimed it so" and "there was no Earl to tell [xem] otherwise". According to

Yurl, xe was able to do this due to "some precedent of law established in Abram's time", though xe wasn't the first Consortium member to have this idea.

Asphodel appears to be generally disliked throughout Qud, particularly by the Barathrumites.

Aloysius refers to Asphodel as a "self-important churl";

Mafeo refers to xem as "the so-called Earl" and claims he is "loath to recognize nobility to begin with";

Dardi says he has "little to say about self-appointed nobility" and believes that the Barathrumites should "simply appease Asphodel and leave xem to xyr fantasies"; and

Otho refers to xem as a "troublesome merchant" and encourages the player to "dispose" of xem if they are not able to successfully negotiate for the Spindle.

Even the Consortium of Phyta seems to have a distaste for the Earl; Yurl refers to Asphodel as a "socialite" and a "scoundrel" and says of xem: "You can hate xym -- and I do -- but you have to admire xym (I don't)." Additionally, Yurl claims that Asphodel would feel pressured to agree to the player's terms if they were loved by the Consortium, as "xe has enough enemies among phyta", and tells the player to "sharpen [their] shears" if negotiation falls through (they then wink with one of their leaves somehow).

Asphodel will always be accompanied by 12

asphodelytes, who will be followers to xem.[2][3][4] These asphodelytes will fight alongside Asphodel and each other if any of them are made hostile. Like Asphodel, asphodelytes are sapient mutated plants belonging to the Consortium of Phyta and flowers factions. Unlike Asphodel, however, they possess Electrical Generation at mutation level 7 and Teleportation at mutation level 10. Their electric resistance is 100, making them completely immune to electric damage. Asphodelytes come with no equipment or weaponry, and will simply attack in melee with their "manipulators", which are equivalent to their fists.[5]

Asphodel only comes with one piece of equipment, a

clay pot, which will grant xem an AV bonus of

2. Xe possesses no weaponry, and will simply attack in melee with xyr manipulators, which are equivalent to xyr fists.[2]

Asphodel possesses only one skill, Berate, which allows xem to inflict shamed on xyr targets.[2]

Asphodel will never spawn hated by insects or trees.[2]

If the player performs the water ritual with Asphodel and has sufficient reputation with the Consortium of Phyta, xe can teach them the Snake Oiler skill. The player can also trade secrets with xem, or recruit xem as a companion, in this way. Finally, the player is able to buy xyr most valuable item for reputation through the water ritual; however, this will usually be xyr clay pot, as it is the only item xe will usually possess.

Notably, Asphodel is able to reveal to the player the location of the

oddly-hued glowpad as a secret.[6].

While Asphodel is part of the flowers faction, xe is not able to teach you their water ritual skill of Persuasion.

Caution: This section contains unverified speculation and should not be considered canonical.

This information is reliable as of patch 2.0.201.88.
Retrieved from "https://wiki.cavesofqud.com/index.php?title=Asphodel,_Earl_of_Omonporch&oldid=60507"
Categories: