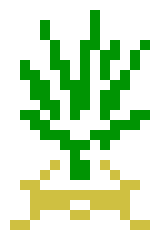 Sharp leaves burst forth from a decorative pot like a verdant geyser frozen in place. The leaves twitch with an irritation at every offending stimulus, an assumption you might consider conjecture if not for the strong telepathic aura of frustration exuding from xyr leafy form.

Sixshrew is a sapient mutated plant member of the Consortium of Phyta and villagers of Ezra factions. Xe that runs the Consortium tradepost in the northwestern corner of Ezra.[1]

Sixshrew is an irritable sentient succulent. Xe claims to have been "unceremoniously dumped" in Ezra after "decades of service", presumably referring to the Consortium of Phyta; this may be the reason for xyr ornery disposition. Xe is quite rude and sarcastic, and seem to harbor a distaste for non-plant life, referring to creatures of flesh as "meat-beings". When asked, xe declines to answer why xe is called "Sixshrew", and begins calling the player a "pest".

Yla Haj, who lives right next door to xem. Xe refers to Yla Haj as a "fleshy tinker" and complains of the "racket" she produces "day and night", which travels easily through "the thinnest, most conductive walls ever crafted". Yla Haj similarly seems to dislike Sixshrew, as when asked what she thinks of xem, she simply replies: "I don't."

Sixshrew is a general merchant, and is notable for stocking relatively high-tier items and equipment. Xe will periodically restock xyr wares, which are generated in accordance with the following table.[2]

Notably, due to xyr Consortium of Phyta affiliation, Sixshrew will be hostile to players with enough fungal infections.

Sixshrew only comes with one piece of equipment, a

clay pot, which will grant xem an AV bonus of

2. Xe possesses no weaponry, and will simply attack in melee with xyr manipulators, which are equivalent to xyr fists.[3]

Sixshrew possesses the Cudgel Proficiency and Berate skills. The former will increase Sixshrew's accuracy when attacking with xyr manipulators, and the latter will allow Sixshrew to inflict shamed on a target.[3]

This information is reliable as of patch 2.0.201.88.
Retrieved from "https://wiki.cavesofqud.com/index.php?title=Sixshrew&oldid=65936"
Categories: