From Caves of Qud Wiki
Jump to navigation Jump to search
This information is reliable as of patch 2.0.201.48. If this is no longer the current patch, you can help by updating it.
Force Bubble 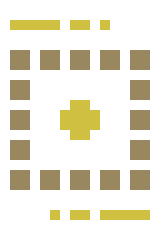 You generate a force field around your person.

Creates a 3x3 force field centered around yourself
Duration: (level based) rounds
Cooldown: 100 rounds
You may fire missile weapons through the force field.

This mutation grants the "Force Bubble" activated ability, which when used, will create a forcefield in every tile adjacent to the player, forming a contiguous "bubble". These forcefields will move with the player as they move, with the player always remaining at the center.

The forcefields created by Force Bubble are solid obstacles with

-10 DV. While this means they are not indestructible, they are incredibly difficult to penetrate with conventional weaponry. Other creatures are unable to pass through the forcefields, unless they are phased or have an implanted

force modulator. Additionally, enemies are unable to fire missile weapons and ranged mutations through the forcefields, while the player is able to.

If the player moves one of their forcefields into the same tile as a creature, that creature will be pushed in the direction of the player's motion. Creatures who are standing immediately adjacent to the player when Force Bubble is used will also be pushed away. This effect does not apply to non-creature objects, items on the ground or most walls.

The forcefields will persist for a mutation level based number of rounds before disappearing. If the forcefields are affected by normality or are crossed by a creature wearing an

ontological anchor, they will instantly collapse and disappear, releasing an electrical discharge into a random adjacent tile that deals

The following formula is used to determine duration based on mutation level.[2]