From Caves of Qud Wiki
Jump to navigation Jump to search
This information is reliable as of patch 2.0.201.48. If this is no longer the current patch, you can help by updating it.
Temporal Fugue 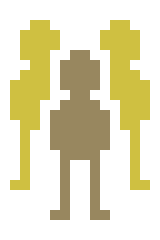 You quickly pass back and forth through time creating multiple copies of yourself.

Temporal Fugue is a mental mutation that allows the player to create temporary clones of themselves to fight for them.

This mutation grants the "Temporal Fugue" activated ability, which when used, will create a mutation level-based number of copies of the player. These copies will be allied to the player, and will be perfect clones, possessing all of the player's items, stats, mutations, skills, etc. They will be hostile to any creatures that are hostile to the player, and will attack such creatures. They can also be ordered to perform certain actions as with any other companion.

The copies will last until they are killed, or for a number of rounds as determined by mutation level before simply disappearing. They will not leave behind any of the items they were created with upon dying or disappearing, and any of these items that are somehow removed from their inventory will disappear along with them. They will leave behind any items they acquired after their creation, however.

They will make liberal use of abilities and items. Of special note are those which may destroy objects such as