From Caves of Qud Wiki
Jump to navigation Jump to search
This information is reliable as of patch 2.0.201.114. If this is no longer the current patch, you can help by updating it.
Freezing Ray 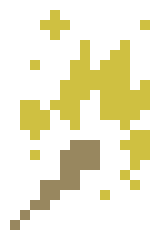 You emit a ray of frost from your (variant).

Freezing Ray is a physical mutation that grants the

icy vapor natural body equipment on the limb of your choosing, allowing you to emit a freezing ray from that limb. On character creation, the player can Customize to select between the Hands, Feet, and Face, designating which limb the icy vapor will be located on.

Hitting a creature with a freezing ray deals Cold damage and forces a Temperature change dependent on the mutation level. Creatures with Freezing Ray will also decrease their targets temperature when making melee attacks; the attack can be made by any limb (even those wielding weapons) and does not need to penetrate for this temperature change to occur.

Having this mutation sets your brittle temperature to a value dependent on the level of the mutation.[1] Note that it is set to this value rather than being reduced by it, regardless of other factors.

Freezing Ray allows creatures to wear equipment in its designated limb's slot and will continue to function even if that limb is covered. Losing the limb the icy vapor is located on will result in losing the mutation's abilities until the limb is restored.

If Freezing Ray is present on the same limb as other natural equipment, such as a

Beak, that equipment will be icy. This will not be the case if the natural equipment occupies the limb's slot, such as in the case of the

For each additional limb similar to the one that hosts the Freezing Ray (pair of limbs in case of hands), ray damage increases by 1:[1] for instance, having Freezing Ray level 4 on hands,