From Caves of Qud Wiki
Jump to navigation Jump to search
This information is reliable as of patch 2.0.201.68. If this is no longer the current patch, you can help by updating it.
Evil Twin (D) 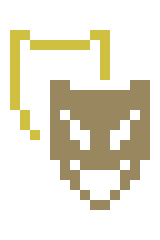 Acting on some inscrutable impulse, a parallel version of yourself travels through space and time to destroy you.

Each time you embark on a new location, there's a small chance your evil twin has tracked you there and attempts to kill you.

Evil Twin (D) is a mental defect that causes the player to be pursued by an "evil twin", an alternate, hostile version of themself.

Every time a player or creature with Evil Twin enters a zone that they've never been to before, there is a 5% chance that an evil twin will spawn on a random tile within that zone.[1] The arrival of the twin will be announced to players by the following message:

This evil twin will be a perfect copy of their progenitor, sharing their level, stats, abilities, mutations, equipment, etc., with a few notable exceptions: they are aligned with highly entropic beings, are colored black, and are named "Evil [name]". Additionally, they will not have the Evil Twin defect themself.[1] Finally, evil twins will not drop their items on death.

Evil twins spawn with an aggressive base demeanor and are hostile to their progenitor, and will seek to destroy them immediately upon spawning, utilizing all of the abilities and items at their disposal to do so. The player's evil twin is able to detect the player even without being able to see them, and thus will pursue them no matter where in the zone they are. The twin will be relentless in this pursuit, preferring to advance on the player even when being attacked by hostile creatures. If the twin is unable to reach the player for any reason, they will remain completely still and will not seek out hostile creatures to fight, though they will defend themself if they are attacked first. They will resume chasing the player as soon as a valid path becomes available.

The evil twin is not actually a single entity; a new evil twin is created whenever Evil Twin's effect is triggered, even if other twins exist elsewhere in the world. This means multiple twins can exist at one time. Killing one's evil twin will not stop new twins from appearing.

dominated, and cannot be made lovesick via a

love injector. Evil twins belonging to other creatures will be friendly to players who possess sufficient reputation with highly entropic beings.

If the player is killed by their evil twin, the achievement Your Better Half is unlocked.