From Caves of Qud Wiki
Jump to navigation Jump to search
This page describes the Space-Time Vortex mental mutation. For information about the entity created by this mutation (or by other sources), refer to Space-time vortex (phenomenon).
This information is reliable as of patch 2.0.201.48. If this is no longer the current patch, you can help by updating it.
Space-Time Vortex 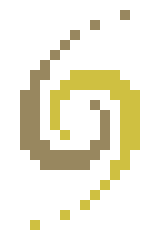 You sunder spacetime, sending things nearby careening through a tear in the cosmic fabric.

Summons a vortex that extinguishes everything in its path
Cooldown: (level based)
You may enter the vortex to teleport to a random location in Qud.
+200 reputation with highly entropic beings

space-time vortex in a nearby area.

This mutation grants the "Space-Time Vortex" activated ability, which when used, will prompt the player to select a tile to use the ability on. The player may only select a currently visible cell within 5 tiles. Confirming one's selection will cause a space-time vortex to be created in a random tile adjacent to the one chosen. The ability will also be placed on cooldown for a mutation level-based number of rounds.

This section is an excerpt from Space-time vortex (phenomenon)#Vortex Behavior.

Space-time vortices move around randomly. If the player, a creature, or another object passes into the same tile as the vortex, or the vortex passes into the same tile as them, they will be teleported to a randomly chosen location somewhere in Qud, be it on the surface, underground, etc. The chosen location will be consistent for anything that crosses through that particular vortex. If the player enters the vortex, they will become lost upon arriving at their destination.

The random zone that the vortex leads to is distributed evenly across the whole world map, but tends to be a surface zone: There is a 50% chance that it will be the surface, and the remaining 50% of the time a stratum is chosen evenly from among all strata no higher than the surface and no deeper than stratum 30. (This means the surface is chosen slightly more than half of the time, and that you can't be taken to a stratum deeper than 30.)[1]

There is also a 0.5% chance for a random creature to emerge from the vortex each turn. This can be any creature that is eligible to appear during dynamic encounters.[2]

The following formulas are used to determine cooldown and bonus duration based on mutation level.[3]

Note that the cooldown cannot be any lower than 5 rounds.