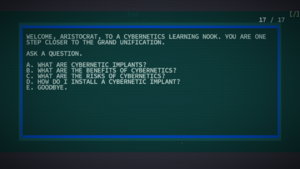 Cybernetics are one aspect of character creation in Caves of Qud. They provide the bulk of character customization for players playing as True Kin, and are roughly analogous to the Mutations available to Mutants.

Cybernetics differ from mutations in that they are not obtained through leveling up and spending points; instead, they are found throughout the world in various locations, and installed into the player's body. They are unable to be leveled as mutations are.

Cybernetics are listed by their short display name below and elsewhere on the wiki. In game, they appear with the prefix [Implant] - <cybernetic name>.

The player is permitted to select one cybernetic during character creation. Only a small portion of the cybernetics present in the game are available for selection when creating a character. Additionally, certain cybernetics are only available when playing as castes belonging to specific arcologies. The player can also choose not to take any cybernetic, which will grant them +1 Toughness, at the cost of starting with 0 license tier (instead of 2).

Cybernetics are not obtained through leveling up as mutations are. Instead, they are found in the game world and installed into the player's body at

Installing a cybernetic requires the cybernetic itself, an unoccupied body part slot that varies depending on the implant, and the appropriate license tier. One's license tier can be upgraded at a becoming nook by spending

Just as cybernetics can be installed, they can also be uninstalled using a becoming nook, which will refund the license points used by that implant. Some cybernetics will be returned to the inventory when uninstalled; others, however, will be destroyed if removed.

Cybernetics are fairly uncommon in Qud, mainly being located in

cybernetics racks found next to becoming nooks. Becoming nooks themselves are sometimes found in Ruins, among other locations.

Credit wedges are also fairly rare, being found randomly as loot in chests, and are sometimes sold by merchants.

cybernetics credit wedge at a

becoming nook. Wedges contain 1¢, 2¢, or 3¢. Increasing one's license tier by 1 point requires from 1 to 4 cybernetic credits, with the cost increasing by 1¢ every 8 license tiers. Once you reach tier 24, further increases will require the maximum cost of 4¢ each.

Additionally, one's license tier can be temporarily increased through other means, such as by equipping the

Kesil Face. If unequipping such an item results in a negative balance of available license points, you will not be able to install additional implants until you uninstall some or increase your license tier in order to restore a positive balance of points.

If an implant is removed from your body due to dismemberment or other effects, its license points are implicitly refunded as it is no longer attached to your body.