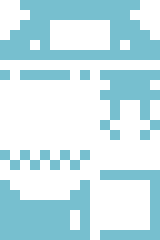 Beneath the glass arch of this enclosure there is a standing rectangle of neutrofoam with the imprint of a human form. Across the foam at eye level, glyphs dance on a diaphonous screen. Surgical machinery, obscured by blinding light, reposes above.

A becoming nook is a special furniture piece with which True Kin can interface, allowing them to install, upgrade, or swap out cybernetics.

becoming nooks will appear in various locations around Qud, such as randomly generated historical sites. There are a few locations that are always guaranteed to have a becoming nook. For more details, refer to the cybernetics locations page.

Becoming nooks require 100 charge per interface to function. They are powered by a highly stable fusion reactor that provides 1000 charge per turn, which means that their charge use requirement is never an issue.[1][2]

Becoming nooks are, like much of the advanced technology left in Qud, relics of the ancient Eater civilization which once ruled over the planet.

They allowed the notably trans-humanist civilization to install cybernetic implants and will still do so for True Kin due to their close genetic connection to the Eaters. Mutant players attempting to use a becoming nook will be turned away, as they are “no aristocrat”.

This information is reliable as of patch 2.0.202.104.
Retrieved from "https://wiki.cavesofqud.com/index.php?title=Becoming_nook&oldid=77705"
Category: