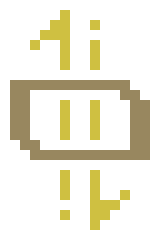 You may phase through solid objects for brief periods of time.

Phasing is a physical mutation that grants the ability to willingly shift between out-of-phase, or "phased", and in-phase. Being phased makes a creature physically intangible to any creature or object that is not phased itself, or that is not omniphase.

Phasing grants the "Phase" ability, which can be toggled on or off to phase a creature out and in, respectively. Its cooldown is incurred as soon as the player phases out, rather than when they phase back in.[1]

If a creature is phased and standing inside a wall that is surrounded by 8 other walls, and then phases back in, they will violate the Pauli exclusion principle, killing them instantly.[2] Otherwise, they will be shunted into a nearby empty spot once they phase back in.

If a creature is forced to phase back in for any reason, such as by coming into contact with

normality gas, the creature will suffer

The following formulas are used to determine duration and cooldown based on mutation level.[1]

Cooldown will be further modified by Willpower, as is typically the case with most activated abilities.

The cooldown for phasing is influenced both by mutation level and by willpower (WI). The following tables indicate Phasing's willpower-adjusted cooldown (CD) at mutation levels 1, 5, 10, and 20.

This information is reliable as of patch 2.0.201.73.
Retrieved from "https://wiki.cavesofqud.com/index.php?title=Phasing&oldid=74787"
Categories: