From Caves of Qud Wiki
Jump to navigation Jump to search
This information is reliable as of patch 2.0.201.44. If this is no longer the current patch, you can help by updating it.
Sleep Gas Generation 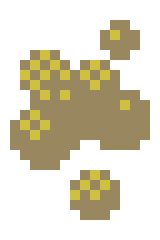 You release a burst of sleep gas around yourself.

Sleep Gas Generation is a physical mutation that generates

sleep gas, which can cause other creatures to fall asleep. Creatures that have this mutation are also themselves immune to all sleep gas, including sleep gas generated by other hostile creatures. This immunity does not extend beyond gas (it won't prevent other forms of sleep).

Generating gas must be toggled on in the abilities menu. Upon choosing to generate gas, for each round that this mutation is active, the user releases a total density of 800 units of sleep gas, spread evenly into the open-air tiles surrounding the user. If some of the tiles surrounding the user are walls or other occluding objects, the sleep gas will be concentrated into a smaller number of cells at a higher density. Once toggled on, the ability cannot be turned off until it has finished generating gas for the full number of turns based on the current mutation's level. Released gas inherits the phase of its owner.

Creatures caught in sleep gas must succeed at a Toughness save or fall asleep for a certain number of rounds. The difficulty of the save and number of rounds of sleep are determined by the strength of the sleep gas (which is equal to mutation level).

The following formulas are used to determine gas level and release duration based on mutation level.[1]

This table shows only the mutation duration (the number of rounds during which the user will release sleep gas) and the level of gas released.

For details about sleep gas Toughness saves and the duration of sleep, refer to the