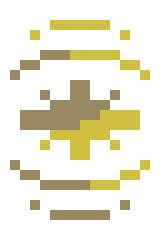 You invoke a concussive force in a nearby area, throwing enemies backward and stunning them.

Range: 8
Area: 7x7
Creatures are pushed away from center of blast, stunned, and dealt crushing damage in up to 3 increments.
Damage increment: (level based)
Cooldown: 50 rounds

Stunning Force is a mental mutation that allows the player to remotely create a shockwave in a nearby area, stunning and dealing damage to anything caught within.

This mutation grants the "Stunning Force", activated ability, which when used, will fire a projectile at a selected tile within 8 tiles of the player, creating a shockwave with an area of 7x7 tiles. This projectile is not perfectly accurate and can deviate from its target slightly. Additionally, while it can only be fired at a visible tile, it ignores walls and other obstacles and can travel through them so long as the player can see tiles on the other side.

The shockwave itself deals mutation level based concussion damage to anything caught within its radius, save for the creature that cast it. This damage can be dealt up to 3 times per target and ignores

AV. The shockwave will also push creatures and other objects away from its center, with mutation level and weight being factors in how far an object gets pushed; heavier objects will be pushed less, while a higher mutation level will cause objects to be pushed further. Finally, creatures caught inside will be stunned for 3 turns, during which time they are unable to perform any actions and have their

DV set to 0.[1] While stunned, a creature has a chance each turn to make a Toughness save to end the stun early.

The following formulas are used to determine damage increment (rounded down) and stun save difficulty based on mutation level.[2]

Note that the damage increment is equal to

This information is reliable as of patch 2.0.201.87.
Retrieved from "https://wiki.cavesofqud.com/index.php?title=Stunning_Force&oldid=74822"
Categories: