From Caves of Qud Wiki
Jump to navigation Jump to search
This information is reliable as of patch 2.0.201.48. If this is no longer the current patch, you can help by updating it.
Adrenal Control 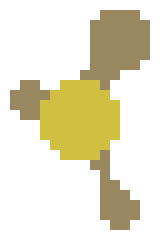 You regulate your body's release of adrenaline.

You can increase your body's adrenaline flow for 20 rounds.
While it's flowing, you gain +(level-based) quickness and other physical mutations gain +(level based) rank.
Cooldown: 200 rounds

Adrenal Control is a physical mutation that allows the player to control the flow of their adrenaline, granting them various bonuses.

Adrenal Control will not increase its own level. Additionally, attributes bonuses gained by boosting mutations that grant such bonuses (such as

Double-muscled) will be temporary and will not count towards satisfying skill requirements.

The following formulas are used to determine bonuses based on mutation level.[1]