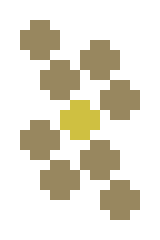 You tap into the aggregate mind and steal power from other espers.

Refreshes all mental mutations
Cooldown: (level based)
Cooldown is not affected by Willpower.
Each use attracts slightly more attention from psychic interlopers.
Small chance each round for another esper to steal your powers
-200 reputation with the Seekers of the Sightless Way

Mass Mind grants the "Tap the Mass Mind" activated ability, which, when used, will set the cooldown of all of the player's mental mutations to 0 and place Mass Mind on cooldown for a mutation level based number of rounds. Unlike most other abilities, the cooldown period for Mass Mind is not modified by the player's Willpower bonus.[1][2]

Each use of Mass Mind will also raise the player's Glimmer by 1 point. This causes psychic assassins to become more powerful and numerous, and the chance to encounter them becomes higher.

Every round, players with Mass Mind have a small chance for their own powers to be stolen, causing their mental mutations to be placed on cooldown for 8d108-80 (Avg: 44) rounds. This cooldown period for other mutations is modified by the player's Willpower.

Despite the description claiming the player is stealing power from other espers and vice versa, espers located on the same map as the player cannot have their abilities placed on cooldown by Mass Mind, nor will a creature on-screen that uses Mass Mind cause the player's own abilities to go on cooldown.

If the user is shimmering due to consuming

Eater's flesh, they will be unable to use Mass Mind or have their powers stolen by other espers.

The following formula is used to determine cooldown and the chance for other espers to steal the player's powers based on mutation level.

The cooldown of Mass Mind cannot be reduced below 100 rounds.[3]

There is a chance each time the player takes an action for the player to have their powers stolen. This triggers specifically off the player's actions. For example, if the player has high quickness, they may take more than one action per "turn" compared to other creatures.[4]

To reduce the chance of powers being stolen to zero, the player would need to attain one of the following combinations of mutation level (ML) and willpower (WI):

This information is reliable as of patch 2.0.201.64.
Retrieved from "https://wiki.cavesofqud.com/index.php?title=Mass_Mind&oldid=74815"
Categories: