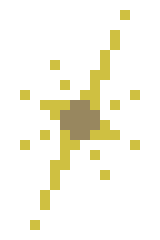 You manipulate light to your advantage.

Light Manipulation is a mutation that allows its user to fire damaging pulses of light, and to generate ambient light in an area around themselves.

Creatures with Light Manipulation passively generate light in a circular area around themselves via the "Ambient Light" toggleable ability. The radius of this area is determined by mutation level. Ambient Light can be toggled to enable and disable this light generation, and has no action cost.

Additionally, Light Manipulation grants the "Lase" activated ability. When Lase is used by the player, they will be prompted to select a tile within the current zone; any tile may be selected, regardless of distance, visibility, or any obstacles that may be in the way. When a tile is selected, the user will fire a beam of light towards that tile. This beam deals light-based damage and is perfectly accurate, having no accuracy variance and being impossible to dodge. Additionally, it is able to pass through

forcefields generated by the user, and over low walls such as

brinestalk fences. Its damage and penetration are determined by mutation level. As it deals light-based damage, creatures killed by Lase will turn into

ashes instead of dropping a corpse.

Mass Mind will regenerate all of the user's charges instantly.

Finally, creatures with Light Manipulation have a mutation level-based chance to reflect light-based damage sources, including Lase projectiles fired by other creatures. Successful reflections will not damage the user and will cause projectiles to be reflected 180 degrees, returning them to their source.

The following formulas are used to determine damage, →PV, maximum charges/light radius and reflect chance based on mutation level.[1]

This information is reliable as of patch 2.0.201.81.
Retrieved from "https://wiki.cavesofqud.com/index.php?title=Light_Manipulation&oldid=74814"
Categories: