From Caves of Qud Wiki
Jump to navigation Jump to search
This information is reliable as of patch 2.0.201.68. If this is no longer the current patch, you can help by updating it.
Multiple Arms 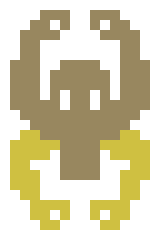 You have an extra set of arms.

The hands granted by Multiple Arms have a mutation level-based chance to attack with whatever weapon they're holding (or their fists if their hands are empty) every time the player makes an attack in melee. This chance is unaffected by the Dual Wield skill tree, but is affected by Jab; additionally, the extra arms will participate if they player uses the Flurry ability.

Due to the fact that

DV values are averaged across all limbs of identical type, having Multiple Arms does not grant the player an advantage in the way of wearing extra glove pieces, as wearing two identical pairs of gloves will still grant the same

DV. Indeed, this can work to the player's detriment, as wearing only one pair of gloves will halve the usual

DV values granted by them.

Multiple Arms does not specially interact with other mutations which also affect the hands slot. For example, the Flaming Hands mutation will still only affect one pair of hands, and will still prevent the player from taking the Freezing Hands mutation.

The following formula is used to determine melee attack chance based on mutation level.