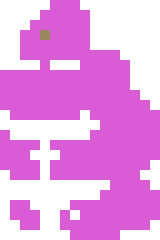 You stand not at the foot of a wintry knoll but beneath a mountain of muscle, swathed in blanched fur, that must be nature's crowning jewel. Cast from the mold of the great apes (or perhaps the exemplar from which those apes were molded), the living god differs only in that He bears not two but six arms, each of which might be the fleeced bole of an ancient yew. His fists are of proportions that suggest the might with which hoary gods beat the mountains into shape when the earth was young. However, His aspect bears not a shred of that divine fury; He doesn't rage but instead sits in contemplation of eons.

Oboroqoru, Ape God is a legendary creature belonging to the apes faction.

Oboroqoru, as His name implies, is the "god" of apes. He appears to be worshipped by members of the apes faction, as well as by the villagers of Kyakukya. A

statue of Oboroqoru can be found within Kyakukya that is tended to by worshippers of various species. These worshippers adhere to a rite that involves scrubbing their face regularly with water in order to keep it clean, hoping that by "presenting unsullied faces to the idol of their ape god", they will "propitiate him and garner his favor and protection". Additionally, while they allow vines and overgrowth to take to Oboroqoru's statue, they make a point to clear it away where it "has threatened to obscure Oboroqoru's gentle countenance".

Mayor Nuntu states that he owed his initial acceptance by the villagers of Kyakukya to "the countenance [he] share[s]" with Oboroqoru.

Whether Oboroqoru is an actual god, or if "god" is simply a title, is uncertain.

An example of the bottom level of Oboroqoru's lair.

Oboroqoru can be found in His lair, which will be located in a random

River Svy tile generally not far east of Kyakukya. The lair is considered a holy place for apes, and thus any members of the apes faction who reside there will be hostile to a player who is not at least favored by apes. Oboroqoru himself will remain passive unless he directly witnesses violence.

Oboroqoru's lair extends 9 strata below the surface. Each stratum of the lair will consist of a single, jungle-like zone filled with

banana trees. Each zone will be populated with various members of the apes and baboons factions, including

The location of Oboroqoru's lair is a secret that can be learned through various methods, most notably by performing the water ritual with legendary apes. Albino apes also have a small chance to spawn as "pilgrims" who will attempt to travel to the lair; the player can potentially follow these pilgrims to discover the lair's location.

Oboroqoru will never begin hostile to the player regardless of their reputation with apes, although He will still become hostile if the player attacks Him or any apes within view of Him.

Oboroqoru attacks in melee with His six \mighty fists. Each fist is a natural cudgel weapon that deals

Oboroqoru possesses every skill in the Cudgel skill tree, serving to make His fists even more deadly. These allow Oboroqoru to Slam the player as well as inflict them with dazed and stunned, among other things.

Oboroqoru also possesses every skill from the Dual Wield tree, though only His upper left hand will benefit from the passive effects of these skills due to His extra arms being granted by the

Multiple Arms mutation. He does gain use of the Flurry ability, however.

Oboroqoru possesses a special version of the Multiple Arms mutation at mutation level 1, which grants him 4 additional arms instead of 2. He also possesses

Oboroqoru does not randomly wander and will never move voluntarily unless He becomes hostile towards a creature.

On death, Oboroqoru has a 100% chance to drop the

Fist of the Ape God instead of a corpse.[4] Killing Him also grants the achievement The Woe of Apes.

If the player performs the water ritual with Oboroqoru and has sufficient reputation with apes, He can teach them the Conk skill. The player can also trade secrets with Oboroqoru, or even recruit Him as a companion, in this way.

Performing the water ritual with Oboroqoru earns the player the In Contemplation of Eons achievement.[5]

This information is reliable as of patch 2.0.201.72.
Retrieved from "https://wiki.cavesofqud.com/index.php?title=Oboroqoru,_Ape_God&oldid=84847"
Categories: